Interns are Leading the Way

I attend the University of Waterloo, one of Canada’s most widely-known engineering schools. Waterloo is famous for a system they call co-op - a regimen of paid internships of 4-8 months in duration in a real-world work environment. Co-op is mandatory for all engineering students, and upon graduation, results in each student having worked at up to 6 different companies for a total of at least 24 months. Each “work term” can happen during the summer, fall, or winter, and can be within Canada or abroad. (We do often go abroad, primarily to Silicon Valley.) Here’s where my class went for internships this past summer: 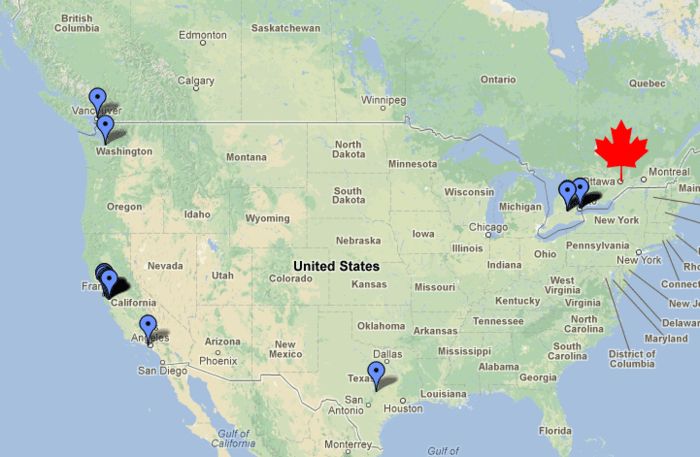 Over the past year, a number of Waterloo interns have had the pleasure of interning at Khan Academy, the groundbreaking non-profit dedicated to “accelerate learning for students of all ages.” They’ve made such an impression on Sal Khan, its founder, that he’s gone on to speak extremely highly of Waterloo - even suggesting using its model as a base for furthering education - in an extremely well-written article in Communications of the ACM:

Waterloo has already proven that the division between the intellectual and the useful is artificial; I challenge anyone to argue that Waterloo co-op students are in any way less intellectual or broad thinking than the political science or history majors from other elite universities. If anything, based on my experience with Waterloo students, they tend to have a more expansive worldview and are more mature than typical new college graduates—arguably due to their broad and deep experience base.

While every student gains valuable experience and ends up hugely enriched by their time in co-op, those in technical disciplines arguably have the opportunity to make a more lasting impact. In particular, the nature of the software industry allows co-ops to contribute to a company on an extremely meaningful level. Classmates of mine interning at companies like Facebook, Google, Square and Twitter have made contributions that are on par with - if not exceeding - those of senior full-time employees. It’s hugely exciting, and in my experience, it makes us interns forget that we’re only interns.

The Abysmal State of Higher Education #

While I can’t extoll the virtues of the co-op system enough, it does set co-op students apart from the general student body in unnerving ways. Co-op students, demanding competitive wages during their internships, often do graduate with little-to-no student debt, while traditional university programs might give no workplace experience and leave a student with loans of tens-of-thousands of dollars. It’s immensely depressing to realize that outside of the little bubble of co-op, that’s the norm for higher education. Almost everybody that goes to college experiences student debt and difficulty finding employment.

It boggles the mind that for many of today’s students, it’s normal to graduate with zero industry experience before immediately searching for a job. Companies shouldn’t have to guess if a candidate, fresh out of school, can apply their theoretical skills to a workplace that is foreign to them. The question:

should we even consider hiring a fresh college grad?

should never have to be asked. Regrettably, with the current state of higher education, being a “fresh college grad” doesn’t give any confidence to an employer, at least for graduates of most schools. (And yet it leaves each student in considerable amounts of debt. What an amazingly flawed system.)

The class of Software Engineering students that I belong to will graduate in just over a year, after having spent five years at Waterloo and abroad. Most will graduate with no debt and with multiple job offers in hand, obtained from real world experience that complements their theoretical knowledge. Why must this be a unique situation? We should not be the outliers - this is how higher education should be.

I recently came into possession of both an Amazon Echo Dot and a Google Chromecast Audio, two devices that can both stream music to speakers. While the Echo Dot includes voice control features and does much more than just play music,... Continue →