Pipelines are an extremely useful (and surprisingly underused) architectural pattern in modern software engineering. The concept of using pipes and filters to control the flow of data through software has been around since the 1970s, when the first Unix shells were created. If you’ve ever used the pipe (“|”) character in a terminal emulator, you’ve made use of the pipe-and-filter idiom. Take the following example:

When run with bash, this pipeline returns a charming little ASCII art version of Tux, the Linux penguin, saying the longest word in the dictionary that contains the word “purple”:

The Life Cycle of a Pipeline #

This little bit of code actually does quite a lot as soon as it’s executed. The moment you hit enter, the following steps occur:

Using a pipeline for this task should seem like a no-brainer. Every task being done here deals with filtering data. Existing data sets are changed at each step. Every process does its own job, and does it quite well, as the Unix philosophy recommends. Each process could be swapped out for another with very little effort.

If you wanted to visualize the pipeline that bash automatically sets up for you, it would look something like this: 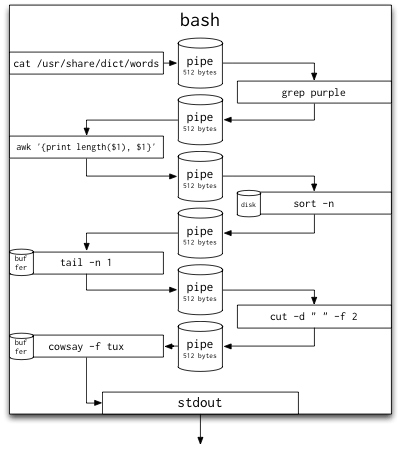 One other advantage of pipelines is their inherently good performance. Let’s use a modified version of the command we ran above to find the memory and CPU usage of each filter component in the pipeline.

(Aside: I’m calling /usr/bin/time here to avoid using my shell’s built-in time command, which doesn’t support the -l flag to print out detailed stats. If you’re on Linux, you’ll want to use the -v flag, which does the same thing. The 2> something.time.txt syntax redirects stderr to a file, while leaving stdout pointing at a pipe.)

After running this command and checking the maximum resident set size, as well as the number of voluntary and involuntary context switches, we can start to see a couple very important things. 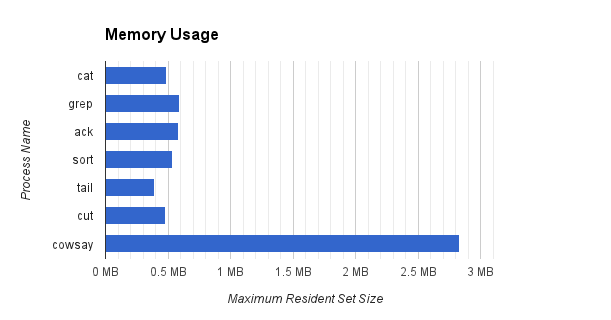 Note that although this example pipeline is amazingly simple, if any of these processes were doing complex computations, they could be automatically parallelized on multiple processors. Aren’t pipelines awesome?

Yes indeed - pipelines are awesome. They make efficient use of memory and CPU time, have automatic and implicit execution scheduling based on data availability, and they’re super easy to create. Why would you not want to use pipelines whenever possible?

The answer: error handling. If something goes wrong in one of the parts of the pipeline, the entire pipeline fails completely.

Let’s try out this pipeline, with an added command that I’ve written in Python. fail.py echoes its standard input to standard output, but has a 50% chance of crashing before reading a line.

So, what happens in this case? When fail.py fails while reading the input, its stdin and stdout pipes close. This essentially cuts the pipeline in half. Let’s take a look at what each process does as you get further and further away from the failed process.

Notice that Tux is no longer saying unimpurpled, the word that he was saying before. The word is wrong! The output of our command pipeline is incorrect. Although one of the filters crashed, we still got a response back - and all of the steps in the pipeline after the crashed filter still executed as expected.

What’s worse - if we check the return code of the pipeline, we get:

bash helpfully reports to us that the pipeline executed correctly. This is due to the fact that bash only reports the exit status of the last process in the pipeline. The only way to detect an issue earlier in the pipeline is to check bash’s relatively unknown $PIPESTATUS variable:

This array stores the return codes of every process in the previous pipe chain - and only here we can see that one of the filters crashed.

This is one of the major drawbacks about using traditional UNIX pipes. Detecting an error while the pipeline is still processing data requires some form of out-of-band signalling to detect a failed process and send a message to the other processes. (This is easy to do when you have more than one input pipe to a filter, but becomes difficult if you’re just using UNIX pipes.)

Other Uses for Pipelines #

So, that’s great. We can make a memory-efficient pipeline to create ASCII art penguins. I can hear the questions now:

How are pipes useful in the real world?

How could pipes help me in my web app?

Valid questions. Pipes work great when your data can be divided into very small chunks and when processing can be done incrementally. Here’s a couple examples.

Let’s say you have a folder full of .flac files - very high quality music. You want to put these files on your MP3 player, but it doesn’t support .flac. And for some reason, your computer doesn’t have more than 10 megabytes of available RAM. Let’s use a pipeline:

This command is a little more complicated than the simple pipeline we used above. First, we’re using a built in bash construct - the while loop with a read command inside. This reads every line of the input (which we’re piping in from ls) and executes the inner code once per line. Then, the inner loop invokes flac to decode the song, and lame to encode the song to an MP3.

How memory-efficient is this pipeline? After running it on a folder full of 115MB of FLAC files, only 1.3MB of memory was used.

Let’s say you have a web app, and that you’re using your favourite web framework to serve it. If a user submits a form to your app, you need to do some very expensive processing on the back-end. The form data needs to be sanitized, verified by calling an external API, and saved as a PDF file. All of this work can’t happen in the web server itself, as it would be too slow. (Yes - this example is a little bit contrived, but isn’t that far off from some use cases I’ve seen.) Again, let’s use a pipeline:

Whenever a user submits a form to my_webserver, it can write a line of JSON to its stdout. Let’s say this line looks like:

The next process in the pipeline, line_sanitizer, can then run some logic on each line:

The next process can verify that the organization exists:

Finally, the last process can bake any lines that remain into PDF files.

And there you have it - an asynchronous, extremely-memory-efficient pipeline that can process huge amounts of data, with a very, very small amount of code.

One question remains in this example, however. How do we handle errors that might occur? If Eric Idle submits a form to our website, and we decide to reject the form, how do we notify him? One very UNIX-y way of doing so would be to create a named pipe that handles all failed requests:

Any process could read from our own custom “errors” pipe, and each process in the pipeline would output its failed inputs into that pipe. We could attach a reader to that pipe that sends out emails on failure:

Then, if our line_sanitizer wanted to reject a line, its behaviour would look like this: 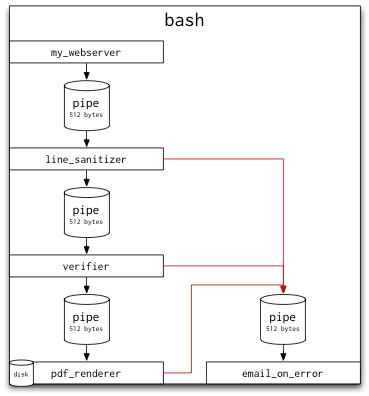 UNIX pipes are great, but they do have their drawbacks. Not all software can fit directly into the UNIX pipe paradigm, and UNIX pipes don’t scale well to the kind of throughput seen in modern web traffic. However, there are alternatives.

Modern “work queue” software packages have sprung up in recent years, allowing for rudimentary FIFO queues that work across machines. Packages like beanstalkd and celery allow for the creation of arbitrary work queues between processes. These can easily simulate the behaviour of traditional UNIX pipes, and have the major advantage of being distributed across many machines. However, they’re fairly well suited to asynchronous task processing, and their queues typically don’t block processes that try to send messages, which doesn’t allow for the kind of implicit execution control we saw earlier with UNIX pipes. These services act more as messaging systems and work queues rather than as coroutines.

To work around this lack of synchronization and pressure in distributed pipeline systems, I’ve created my own project - a Redis-based, reliable, distributed synchronized pipeline library called pressure. pressure allows you to set up pipes between different processes, but adds the ability to have pipe buffers persist and be used across multiple machines. By using Redis as a stable message broker, all of the inter-process communication is taken care of and is OS and platform agnostic. (Redis also gives a bunch of nice features like reliability and replication.)

pressure’s reference implementation is in Python, and it’s still in its infancy. To show its power, let’s try to replicate the pipeline example from the start of this post by using pressure’s included UNIX pipe adapter. (put and get are small C programs that act as a bridge between traditional UNIX pipes and distributed pressure queues kept in Redis.)

The first thing to note - this is an extremely slow operation, as we’re filtering a multi-megabyte file with this method. We end up sending 235,912 messages through Redis, which takes the better part of 4 minutes. (If we move grep to run immediately after cat, and before putting data into Redis, this operation runs more than 1,200 times faster.) However, in the end, we get the correct answer that we’re looking for:

However, another peculiar property can be observed - by logging in to redis-cli, the Redis command line tool, we can find out that very little memory is being used by our pipeline, despite the large set of input data:

pressure is still in alpha, and definitely not ready for wide-scale production deployment, but you should definitely try it out!

Pipelines are hugely useful tools in software that can help cut down on resource usage. Bounded pipelines act as coroutines to only do computation when necessary, and can be crucial in certain applications, like real-time audio processing. pressure provides a way to easily use pipelines reliably on multiple machines. Try using the pipes-and-filters paradigm to solve your own software architecture problems, and see how simple and efficient it can be!

Early in my academic career at the University of Waterloo, I was fortunate enough to land a co-op placement at The Working Group. Back then, the team was just over a dozen people. We were taking on our first mobile projects, and were... Continue →