The Architecture of an Infinite Stream of Music

Nearly a year ago, I launched forever.fm - a free online radio station that seamlessly beat matches its songs together into a never-ending stream. At launch, it was hugely popular - with hundreds of thousands of people tuning in. In the months since its initial spike of popularity, I’ve had a chance to revisit the app and rebuild it from the ground up for increased stability and quality.

(Grab the free iOS and Android apps to listen to forever.fm on the go.)

Initially, Forever.fm was a single-process Python app, written with the same framework I had built for my other popular web app, The Wub Machine. While this worked as a proof of concept, there were a number of issues with this model.

To solve all of these problems in one go, I decided to re-architect Forever.fm as a streaming service-oriented architecture with a custom queueing library called pressure. 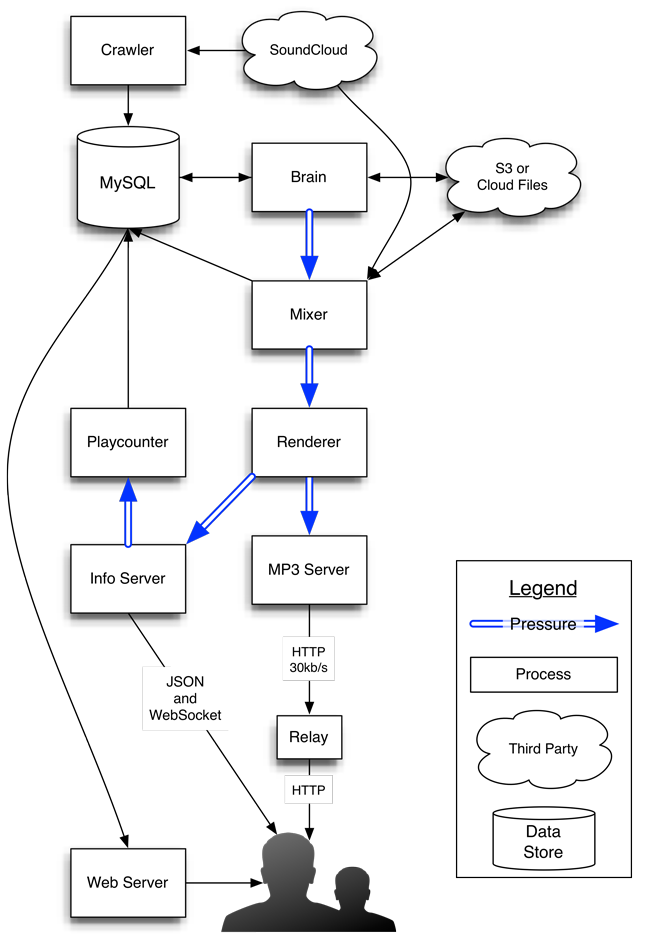 Usually, service oriented architectures are strongly request/response based, with components briefly talking with each other in short bursts. Forever does make use of this paradigm, but its central data structure is an unbounded stream of MP3 packets. As such, a lot of the app’s architecture is structured around pipelines of data of different formats. To make these pipelines reliable and fast when working with large amounts of streaming data, I constructed my own Redis-based bounded queue protocol that currently has bindings in Python and C. It also creates really nice d3 graphs of the running system: 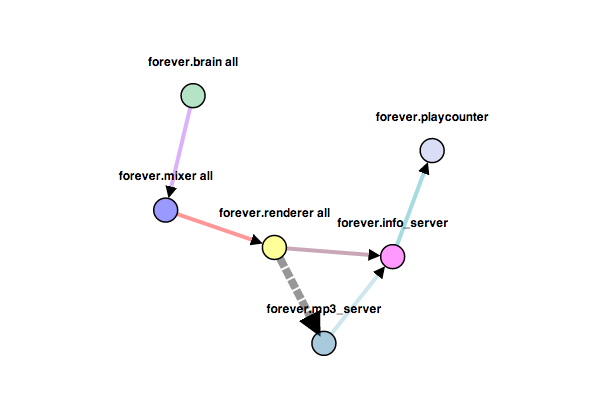 Forever.fm is broken down into multiple services that act on these pipelines of data:

To help achieve an unbroken stream of music and more easily satisfy the soft real-time requirements of the app, pressure queues have two very important properties: bounds and buffers.

Each pressure queue is bounded - meaning that a producer cannot push data into a full queue, and may choose to block or poll when this situation occurs. Forever uses this property to lazily compute data as required, reducing CPU and memory usage significantly. Each data pipeline necessarily has one sink - one node that consumes data but does not produce data - which is used to limit the data processing rate. By adjusting the rate of data consumption at this sink node, the rate (and amount of work required) of the entire processing chain can be controlled extremely simply. Furthermore, in Forever, if no users are listening to a radio stream, the sink can stop consuming data from its queue - implicitly stopping all of the backend processing and reducing the CPU load to zero. By blocking on IO, we let the OS schedule all of our work for us - and I trust the OS’s scheduler to do a much better job than Python’s.

In addition, each queue has a buffer of a set size that is kept in reliable out-of-process storage - Redis, in this case. If a process were to crash for any reason, the buffer in the queueing system would allow the next process to continue processing data for some amount of time before exhausting the queue. With current parameters, nearly all of the services in Forever could fail for up to 5 minutes without causing an audio interruption. These buffers allow each component to be independently stopped, started, upgraded or debugged in production without interrupting service. (This does lead to some high-pressure bug hunting sessions where I’ll set a timer before launching GDB.)

Most of the services involved in this pipeline are backend processors of data - not front-facing web servers. However, I’ve applied the same service-oriented philosophy to the frontend of the site, creating separate servers for each general type of data served by the app. In front of all of these web servers sits nginx, being used as a fast, flexible proxy server with the ability to serve static files. HAProxy was considered, but has not yet been implemented - as nginx has all of the features needed, including live configuration reloads.

With this combination of multiple specialized processes and a reliable queuing system, Forever has enjoyed very high availability since the new architecture was deployed. I’ve personally found it indispensable to be able to iterate quickly on a live audio stream - often in production. The ability to make impactful changes on a real-time system in minutes is incredible - and although somewhat reckless at times, can be an amazing productivity boon to a tiny startup.

Partially thanks to this new architecture, I’ve also built free iOS and Android clients for forever.fm. Download them and listen to infinite radio on the go!

TL;DR: In this post, I build an app that classifies whether an audio sample is a kick drum, snare drum, or other drum sample with 87% accuracy using machine learning. First and foremost, I’m a drummer. At my day job, I work on machine... Continue →